My apologies for the delay. It’s been happening a lot lately, beginning with the holidays, which has rendered me unable to find the time to keep up the weekly being.
However, to make up for this I’ve made this list of ten different yokais originating from traditional japanese folklore. I hope you’ll enjoy it, and see you next week — with that european legendary being I spoke of in an earlier post.

There is a plethora of strange and otherworldly creatures in Japan. Most of which wants to either kill you in disturbing ways or rip the limbs from your friends’ bodies; but there is also those with less ill intent who simply wants to move your pillow.

While merit should be given to these mythological creatures for succeeding at being odd or straight up absurd (as is customary to Japanese folklore in my experience), there is just something extraordinary special about their mythological spirits – or ‘yokai’, as they are called in Japanese. These ‘yokai’ takes the shapes of all kinds of objects and beings, and these are some of the more weird ones.

Did you ever get that feeling as if something gently brushed your butt while you were doing your business? If you answered ‘yes’, then you can consider yourself lucky (if you’re fascinated with spirits, that is), as you might have encountered the yokai ‘Kurote’, literally Black Hand. The Kurote is a black and hairy hand that sticks itself up through your toilet to – yes, you guessed it – gently stroke your butt. According to legend, if you want to get rid of it you simply need to cut it right off, though you risk being visited by the owner of the hand in doing this, and your meeting with it might not be as harmless as the hand is on its own.

Datsueba resides in the underworld; she guards the paths in the afterlife. You can think of her as the ferryman on the river Styx, as she also does take a toll, a total of six mon. You might recognize the coins if you are a fan of Japanese history, as the famous Sanada Clan used the six mons as their family crest. Datsueba is a yokai who steals your clothes, but not in a trickster kind of way, after you’ve travelled the Sanzu River – which you’ll do in a different way depending how you behaved during your life. If you were good, you get to walk on the bridge; and if you were nasty you had to swim through the river on your own. It would not be too bad, except that she steals your clothes in order to give them to her partner, Keneō, who hangs them on a branch in a nearby tree to measure their weight in preparation for each soul’s personal judgement. Which, coincidentally, weighs quite differently if their soaked with water or not.
Don’t try to cheat her by not wearing any clothes at all though – as Keneō will flay you and use your skin as the replacement for your clothes.

A more down-to-earth kind of spirit is the Haradashi, which main purpose is to entertain sad and lonely people with belly-dances. It is a joyful and happy spirit, filled with warmth and kindness. The Haradashi takes on different forms, depending on the legend or which prefecture you visit, however; its signature characteristic is the funny-looking face covering its stomach. The Haradashi has a particular fondness of showing up at the door of lonely individuals but it is also possible to visit the yokai themselves wherever they have taken up residency. Offer it a drink, and it will gladly perform a belly-dance for you, which supposedly cheers you up and helps you get rid of your worries.
Quite similar to  the ‘Rockabelly‘ Yokai in Yokai Watch, with the difference that it prefers hamburgers instead of alcohol.

The majority of yokai are not actually dangerous, even if it might sound like it from what I’ve been telling you, but simply mischievous, and likes to play pranks on silly, unknowing humans. The Nurikabe is not an exception, and it is actually one of the easiest yokai to get rid of, should you stumble upon it.
Nurikabe is basically an invisible wall blocking the way of unwary travelers. It is supposedly impossible to get around it, as it is known to stretch indefinitely in whichever direction you try to get past it, but a simple knock with a wooden stick on the ground or the lower part of the wall should do the trick and get rid of the yokai for you.
The legend quite possibly originated from arriving late to a meeting without a proper excuse or reason. Or it could simply be the invisible manifestation of a Tanuki’s scrotum.
You decide what seems more likely.

The ‘Human Face Tree’ Jinmenju is another strange legend. It’s quite literally what the name suggests – a tree with fruits shaped like human faces. The Jinmenju has one simple purpose, it does nothing else than, well, laugh. The fruits are unable to speak or do anything else at all, but it can smile and it does laugh. According to legend, if you laugh back at the yokai it might laugh in return, and if you manage to make it burst into a great guffaw it might even fall off – which gives you a chance to taste it. If you’re uncertain concerning your comedic capabilities you can just wait until fall and the fruit will drop from the tree by themselves as they ripe. It’s supposed to taste sweet and sour so if you are into that, you might want to try it. If you don’t find the thought of eating a human face slightly disturbing, that is.

The Japanese’s fascination with human faces does not end with the Jinmenju and if it wasn’t odd enough with human-shaped fruits perhaps the Kudan might spark your interest. This yokai is a bit more verbal than the Jinmenju, as it has acquired the gift of human language. Kudan is a human-faced baby cow which gives prophecies of great importance, prophecies that always come true. The prophecies they tell are of varied nature. It can be practically anything; from foretellings of diseases and plagues to good fortune, and then it dies, immediately.

The Kosode no te, or “hands in the sleeves”, is one form of the many Tsukumogami-yokai that dominates Japanese folklore. Tsukumogami are inanimate objects that receive a soul in some kind of way, most commonly after a hundred years of service. The kosode no te is quite similar to the Ittan momen as it haunts old clothing, but with a much more specific background.
This spirit haunts old short-sleeved kimonos, worn traditionally by young un-married girls or prostitutes.  As the name quite literally suggests, a pair of ghostly hands appear in the sleeves and proceeds with its mission, which seems to vary, depending on the legend. Some legends speak of the yokai appearing in the clothing of deceased prostitutes, reaching out to collect their clients debts or even seeking the embrace of men, while some legends suggests that it manifests itself through an old woman’s spirit and its desire to feel young once more.

You find this yokai in mountainous areas, most commonly by streams of clear water. Think of it as the Asian equivalent of the Kelpie, or the Neck, but instead of tricking you by appearing as a beautiful horse, the azuki aria, often described in the shape of an old man with crooked teeth, spends most of its time washing its azuki beans, commonly known as the beans red bean paste is made from. The beans are very popular in Japan – lately it’s been gaining popularity in the west as well – and has a wide variety of uses, from ice cream seasoning to skin care treatment. If you ever hear some odd singing while walking through the forest or the mountains, chances are; you’ve stumbled upon an azuki aria. The yokai sings about washing his beans or – here’s the kicker – finding a human to eat. However, azuki arai are supposedly very shy, and if they hear any sound they are likely to run off, so chances are you’ll be safe even if you come across one.

You’ll meet the mikoshi nyūdō in the form of a lone traveler, often as a priest or monk, if you’re walking on a path or street. Everything might seem normal until you look up to meet the traveler in its face whereas the mikoshi nyūdō extends it neck further and further, rendering you unable to meet its eyes. While you’re occupied with this, the yokai approach you in order to devour you. The good thing is that it is fairly easy – in theory – to keep it from eating you alive, which you do by basically acting confident and telling the mikoshi nyūdō that you’ve seen through it, before it turns into a murderous beast and, you’re safe to walk past it. However, if you look at it the wrong way while doing this, you’re done for anyway. There is no other way around it apart from this, as it will hunt you down if you turn around or impale you with bamboo spears should you try to run past it.

The yokai that I personally found the most terrifying during my research, even considering its comical appearance, is without a doubt the wa nyūdō. This yokai is nothing more than a head, travelling the land, stuck to an ox-cart wheel, engulfed in flames. Doesn’t sound too scary, right? But as is customary with the yokai legends, even though it seems harmless, it often times isn’t. The wa nyūdō is no exception. Simply catching the sight of this yokai from Hell – or Jigoku, which is the Japanese Buddhist variant – might throw your whole family into disease, and should the wa nyūdō notice your gaze it will rip the limbs from your body – or your child’s – and eat them. And as if that wasn’t enough, it might claim your soul which he drags to Jigoku and – well let’s just say Jigoku is not a place where anyone of us, nor our souls wants to be, as it makes Christian Hell sound like paradise to you if you’ve been even a little bit bad.
To keep safe your best bet is staying inside if you see ti coming, barricading your door, and hanging up lots of protective charms. 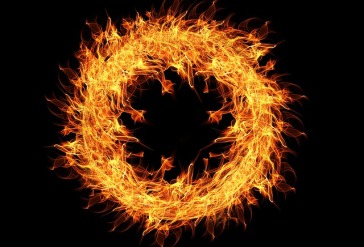 2 thoughts on “Legendary being(s) of the week – Yokai Special”